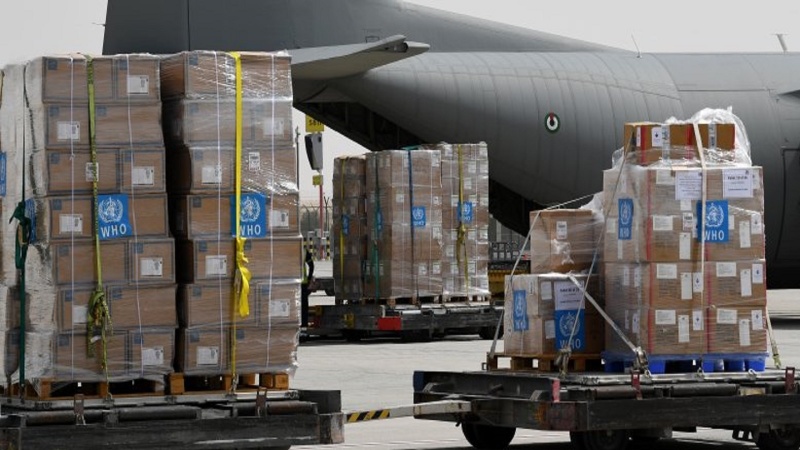 Iran has received the first planeload of assistance from the World Health Organization (WHO), including eight tonnes of medicines and test kits, to help the country in its battle against the new coronavirus outbreak.

Representatives of the UN’s health agency have also arrived in Iran to examine the country’s handling of the virus.

Iran’s Health Ministry announced that the disease has claimed 66 lives and infected 1,501 others so far. Also 291 people have fully recovered.

The WHO supplies, which are worth more than $300,000, include gloves, surgical masks and respirators.

Robert Blanchard with the WHO in Dubai warned that global supplies were running low and said, “Today’s flight will carry 7.5 tonnes of medical equipment and supplies, primarily the critical items needed for infection prevention and control to support health care workers in Iran.”

“What we see now is that demand has greatly exceeded our available stocks … and we are struggling to get access to more supplies,” he added.

He noted that the WHO dispatched a six-member medical team of doctors, epidemiologists and laboratory specialists who will help Iran detect and control the coronavirus, adding that it was the first WHO team to be sent to Iran since the outbreak of the disease.

Meanwhile, WHO operations manager Nevien Attalla said some 15,000 Iranian health workers would benefit from the supplies, the “first big shipment which supports the response to coronavirus.”

In a tweet on Monday, Iran’s Foreign Minister Mohammad Javad Zarif thanked the world body and “friendly nations” for their solidarity with Iran in fighting new coronavirus (COVID-19) in the face of the US economic terrorism.

Iranian medical officials have assured that the country will contain the outbreak, noting that the condition of most of the patients diagnosed with the virus has improved.

The country has mobilized all its resources to confront the disease, with the Islamic Revolution Guards Corps (IRGC) and Iran’s Army being the latest to join the campaign Sunday.

Iran’s Ambassador to London Hamid Baeidinejad also said on Monday that Britain, France and Germany are set to dispatch the first shipment of assistance to Tehran tonight to fight the coronavirus.

“Along with efforts by Iranian engineers and technicians to supply domestic needs, coordination with the British officials is also being made to buy some important and emergency medical equipment from this country’s market to fight the coronavirus,” Baeidinejad said in a tweet.

In a joint statement, the three European countries announced their plan to send emergency equipment to Iran to fight the coronavirus outbreak.

“France, Germany and the United Kingdom express their full solidarity with all impacted by COVID-19 in Iran,” it said, adding that laboratory test equipment and protective body suits and gloves would be sent by plane later on Monday.

They also committed to providing Iran with an “urgent additional financial support” of 5.0 million euros.