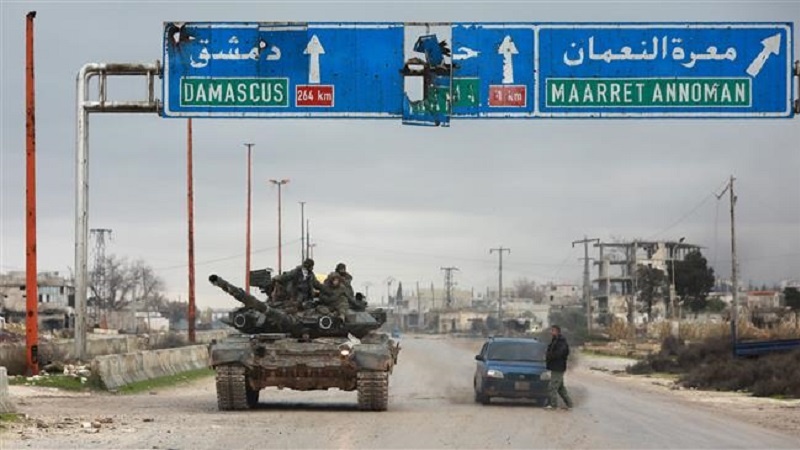 The Syrian army has liberated three more villages in the northwestern Idlib province as part of an operation to liberate the last major terrorist-held territory in the West Asian country.

Syria’s official news agency SANA reported on Sunday that the government forces liberated the villages of Inqrati, Kafr Battikh and Kafr Dadikh after inflicting heavy losses on foreign-backed Jabhat al-Nusra terrorists southwest of the city of Saraqib in Idlib.

This came after the Syrian army retook control of Louf and Qamhana villages in Idlib.

Also on Friday, the Syrian soldiers recaptured the town of Hish as well as the villages of Ameria, Kafr Mazdah, Tabish, killing and injuring score of terrorists.

This week, Syrian troops, backed by Russia’s air cover, made rapid advances in Idlib liberating the city of Ma’arat al-Nu’man, which is situated 100 kilometers southwest of the militant-controlled city of al-Bab.

The Syrian forces are advancing against foreign-backed Takfiri terrorists in Idlib, tightening the noose in their last major stronghold.

Syria’s Ministry of Foreign Affairs and Expatriates wrote to the United Nations on January 25, stressing that the operation in Idlib and Aleppo against Takfiri elements “will not stop until the elimination of those terrorists, who threaten safety and security of Syrian civilians.”

The Syrian troops on Sunday also managed to liberate Khalsa village in the southern countryside of the country’s northwestern province of Aleppo after eliminating the Takfiri terrorists there.

They had liberated the strategic town of Khan Tuman in Aleppo on Wednesday after fierce clashes with members of the Takfiri Hayat Tahrir al-Sham (HTS) terrorist group.

The group is a coalition of different factions of terror outfits largely composed of the Jabhat Fateh al-Sham Takfiri terrorist group, formerly known as al-Nusra Front.