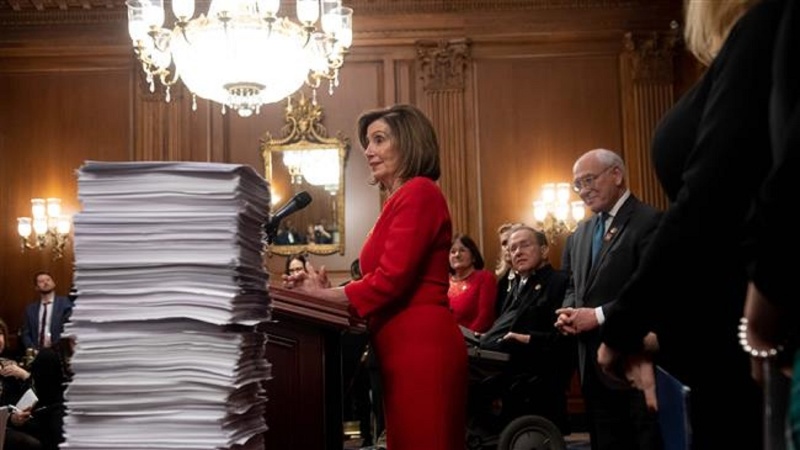 A majority of Americans approve of US President Donald Trump’s impeachment by the House of Representatives earlier this week, according to a new poll.

The Democratic-controlled House approved two articles of impeachment against the Republican president on Wednesday on charges of abuse of power and obstruction of Congress.

A narrow majority of US voters, 52 percent, support the Houses vote to impeach Trump, while 43 percent disapprove of the action, the Politico/Morning Consult poll shows.

Some 51 percent would support a decision by the Senate to remove him. Five percent of voters have no opinion on Trump’s impeachment.

Support for Trump’s impeachment fell largely along party lines. Among Democrats, 85 percent approve of the House’s action, and only 12 percent disapprove. Approval among Republicans is only 16 percent, compared with 81 percent who disapprove.

Among independents, 48 percent approve of the House passing articles of impeachment and 41 percent disapprove.

Impeachment begins in the House. If the lower chamber of Congress approves articles of impeachment, a vote is then held in the Senate. A two-thirds majority vote would be needed in the upper chamber to remove the president from office.

With Republicans in control of the upper chamber of Congress, Trump’s acquittal in a January trial seems certain.

The Politico/Morning Consult poll, conducted December 19-20, is the first national survey to measure public opinion on the impeachment vote.

In the poll, 43 percent of voters say they are more likely to vote for a member of Congress who supported impeachment, while 34 percent say they are less likely. Sixteen percent say a member’s vote on impeachment wouldn’t have an impact on their vote.

House Democrats launched an impeachment inquiry against Trump in September after the unknown whistle-blower alleged the Republican president pressured his Ukrainian counterpart to investigate former Vice President Joe Biden and his son Hunter, who had served as a director for Ukrainian energy company Burisma.

Democrats are looking into whether Trump abused his power by withholding $391 million in US security aid to Ukraine as leverage to pressure Kiev to conduct an investigation that would benefit him politically.