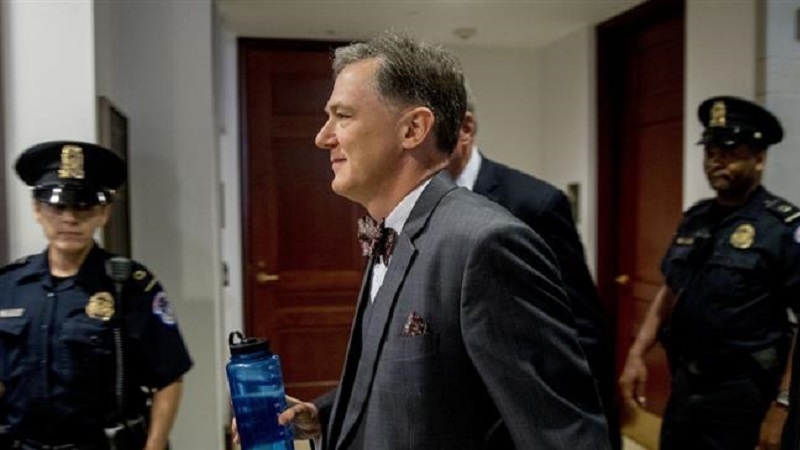 Another senior US diplomat has condemned President Donald Trump in the ongoing impeachment inquiry over the Ukraine scandal, accusing Trump of a “campaign full of lies” against former US ambassador to Ukraine Marie Yovanovitch before she was recalled from her post.

According to Press TV quoting a transcript of his testimony released on Thursday George Kent, the Deputy Assistant Secretary of State for European and Eurasian Affairs, told congressional investigators that he was largely sidelined on Ukraine policy by Trump’s inner circle and was also subject to attacks by Giuliani.

The Democratic-led inquiry in the US House of Representatives is focused on a July 25 phone call in which Trump asked Ukrainian President Volodymyr Zelenskiy to investigate Joe Biden, a former Vice President and now a leading Democratic rival in the 2020 US presidential election.

Trump has lashed out at Democrats for leading the impeachment inquiry that now threatens his presidency.

The impeachment inquiry has focused on Giuliani, the former New York City mayor who has been mentioned frequently in testimony by US diplomats who have accused him of running a shadow US policy toward Ukraine to pressure it to carry out a corruption investigation into Biden and his son, who worked for a Ukrainian gas company.

Several State Department employees have testified to the congressional inquiry that US Secretary of State Mike Pompeo failed to halt a White House effort to improperly press Ukraine to investigate Biden and did little or nothing to defend US diplomats from politically motivated attacks by the president and his supporters.

Kent mentioned Giuliani 73 times in his testimony to lawmakers delivered behind closed doors on October 15 but only released on Thursday.

Yovanovitch, the former US Ambassador to Ukraine, was abruptly removed from her post in May. Kent said Giuliani conducted a smear campaign against the envoy.

“His assertions and allegations against former Ambassador Yovanovitch were without basis, untrue, period,” Kent testified.

“Giuliani, at that point, had been carrying on a campaign for several months full of lies and incorrect information about Ambassador Yovanovitch, so this was a continuation of his campaign of lies,” Kent said.