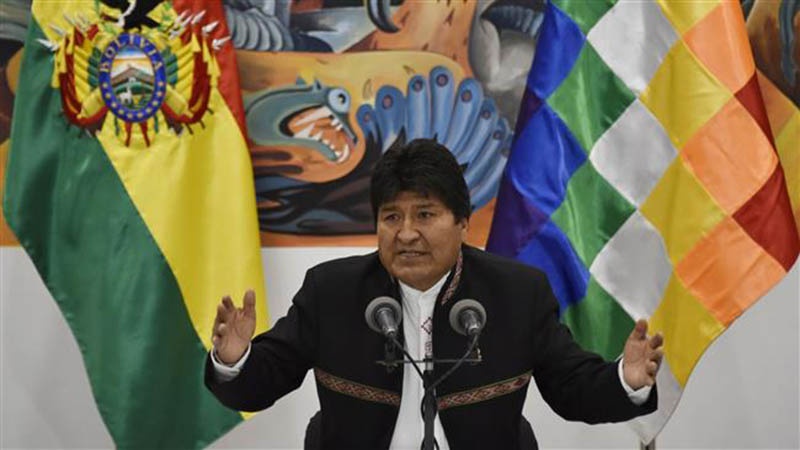 Bolivian President Evo Morales declared victory Thursday in elections whose disputed results have triggered riots, a general strike and opposition charges that he is trying to steal the election to secure a fourth straight term.

But hours later Morales said he is open to holding a runoff if necessary, as demanded by his critics.

Election officials said that with 98.54 percent of the ballots counted from Sunday’s vote, Morales has 46.85 percent, against 36.68 percent for his closest rival, the centrist Carlos Mesa.

A margin of at least 10 points would mean outright victory and no runoff.

“We won in the first round,” Morales told a news conference. He called this “good news.”

There was no immediate confirmation of a Morales victory from the Supreme Electoral Tribunal. But Morales said later that if he does not obtain a 10-point margin he will respect this result. “If we have to go to a second round, we will go,” he said.

Mesa said Wednesday he would not recognize results tallied by the tribunal, which he accused of manipulating the count to help the leftist Morales win.

Mesa is insisting there be a runoff between him and the president, and called on supporters to keep protesting in the streets of this resource-rich but poor South American country.

Observers from the Organization of American States have expressed concern over the vote count, which first showed Morales and Mesa in a tight race and headed for a runoff, and then shifted dramatically Monday to give the president a wider lead.

The European Union, Brazil, Argentina and the US also expressed concern over how the votes were tallied.

The US State Department updated its travel alert for Bolivia, urging “increased caution … due to civil unrest.”Clashes broke out between rival demonstrators Wednesday in the eastern city of Santa Cruz, the country’s largest and an opposition bastion.

Offices in the city housing Bolivia’s electoral authority were set on fire overnight, and security forces clashed with demonstrators in La Paz and elsewhere.

On Monday, after the release of the controversial election results, mobs torched electoral offices in Sucre and Potosi, while rival supporters clashed in La Paz.

The OAS and the Catholic church in Bolivia have called for a runoff election as the best way to end the crisis.Morales is seeking another term amid controversy.

He obtained Constitutional Court permission in 2017 to run again despite a 2016 referendum in which Bolivians said no to letting him do so.

The onetime leftist union leader has led Bolivia for the past 13 years, though his popularity has waned amid allegations of corruption and authoritarianism.

Morales points to a decade of economic stability and considerable industrialization as his achievements, while insisting he has brought “dignity” to Bolivia’s indigenous population, the largest in Latin America.