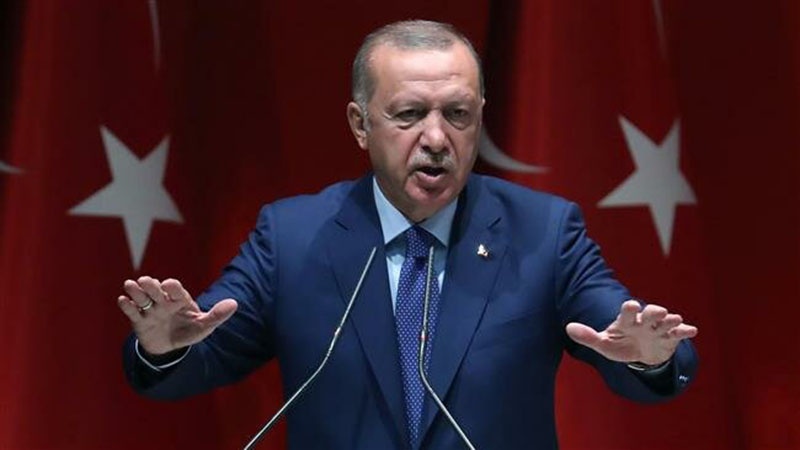 President Recep Tayyip Erdogan says Turkey will never sit at the negotiating table with Kurdish militants in Syria, emphasizing that Ankara’s military operation in the Arab country’s north will come to an end only when the Kurds leave the region and a “safe zone” is established there.

Speaking at a meeting of his ruling Justice and Development Party (AK Party) in Ankara on Wednesday, Erdogan said, “There are some leaders who are trying to mediate…There has never been any such thing in the history of the Turkish republic as the state sitting at the same table with a terror organization,” referring to the Kurdish militants.

Turkey launched the offensive, called Operation Peace Spring, last week with the aim of purging the northern Syrian regions near its border of Kurdish militants, whom it views as terrorists linked to local autonomy-seeking militants of the Kurdistan Workers’ Party (PKK).

The incursion came after the US abruptly pulled its forces out of the region, clearing the path for Turkey to go ahead with a planned military action against Washington’s longtime Kurdish allies.

Erdogan said Turkey will end its offensive if the Kurds on the Syrian side of the border lay down their arms and withdraw from the planned “safe zone” that would span from the city of Manbij to the Iraqi border.

“Our proposal is that right now, tonight, all the terrorists lay down their arms, their equipment and everything, destroy all their traps and get out of the safe zone that we have designated,” Erdogan said, adding that this would be “the quickest way of solving the problem in Syria.”

He emphasized that “no power” can stop the Turkish military operation in Syria until Ankara reaches its goals.

“We informed the US, EU and Russia before the operation began that … we want this terrorist organization to be removed from our borders,” he said at a weekly meeting of his ruling AK Party, referring to the YPG.

“When the zone from Manbij to Iraq that is 350km [is cleared] when we could establish a safe zone, this operation will be over. But until that point, no power can stop us,” he said.

The Turkish leader claimed that “Turkey is not fighting against Syrians; it is fighting with Syrians against oppressors.”