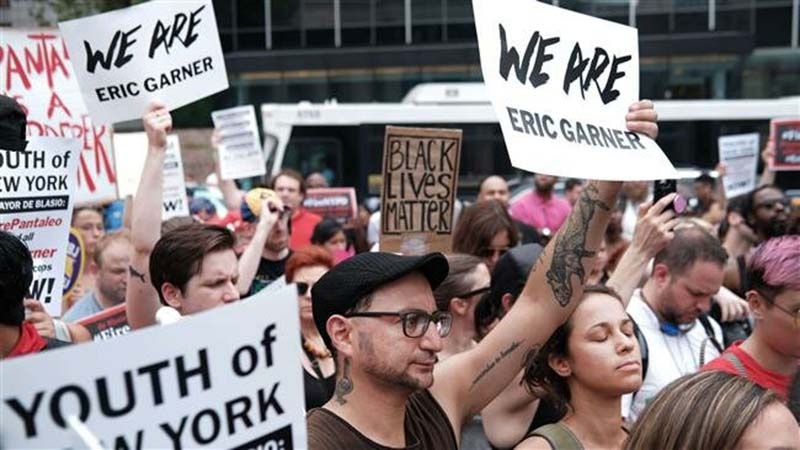 Several hundred people took to the streets of New York on Wednesday to protest the US Department of Justice’s decision not to bring charges against a New York City policeman in the chokehold death of an unarmed black man in 2014.

The demonstrators also vented their anger at New York Mayor Bill de Blasio, a Democrat who has declined to fire Officer Daniel Pantaleo in the five years since Eric Garner died in police custody.

De Blasio told reporters on Wednesday that he was surprised to learn that the Justice Department would not bring charges and that he regretted delaying the start of disciplinary proceedings against Pantaleo for years at the DOJ’s request.

De Blasio, who is running for his party’s US presidential nomination, said New York City’s police commissioner would decide by August whether to punish or fire Pantaleo.

The officer has been on desk duty since he was seen in bystanders’ cellphone videos putting Garner in a prohibited chokehold and wrestling him to the ground on July 17, 2014. Garner is heard in the videos of the incident saying “I can’t breathe!” at least 11 times shortly before he died.

The death of Garner, 43, who was initially approached by police because they suspected him of illegally selling untaxed cigarettes, touched off a nationwide furor and helped give rise to the Black Lives Matter movement.

In announcing that it would not bring charges against Pantaleo, Justice Department officials said they could not conclusively determine whether Pantaleo willfully committed misconduct, which must be established to prove that he violated Garner’s civil rights.

“We asked for (Pantaleo) to be prosecuted. We asked him to be fired. We asked for it. Now we’re demanding he gets fired,” Garner’s daughter, Emerald, said at the demonstration.

Protesters chanted “Hey hey, ho ho! Pantaleo has got to go!” and “I can’t breathe!” as they were addressed by civic rights activists. The crowd later marched to NYPD headquarters in Lower Manhattan, where they laid down cardboard coffins.