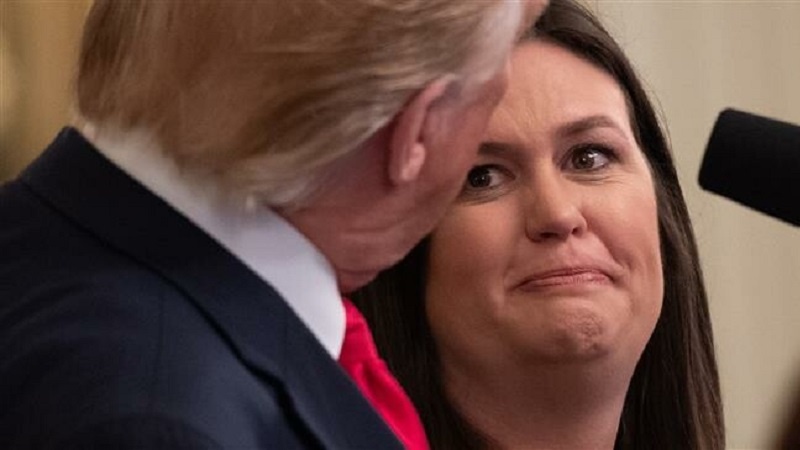 US President Donald Trump has announced the surprise departure of White House Press Secretary Sarah Sanders, who has fiercely defended Trump and presided over the end of the daily news briefing for about two years.

According to Press TV, Sanders has been one of Trump’s closest aides and has been at his side during his tumultuous two and a half years at the White House.

Sanders succeeded Sean Spicer as press secretary at the White House in July 2017. Before that, she served as Spicer’s top deputy in the press office as well worked for the Trump 2016 campaign for about a year.

Trump on Thursday announced her exit but did not name her replacement.

“After 3 1/2 years, our wonderful Sarah Huckabee Sanders will be leaving the White House at the end of the month and going home to the Great State of Arkansas,” Trump said.

He also said that he hoped she would run for governor of Arkansas.

“She is a very special person with extraordinary talents, who has done an incredible job! I hope she decides to run for Governor of Arkansas – she would be fantastic. Sarah, thank you for a job well done!” he added.

Minutes after tweeting out the news, Trump called Sanders on stage at a White House event to praise her as a “warrior” who did an “outstanding job.”

“If we could get her to run for governor of Arkansas, I think she’ll do very well. I’m trying to get her to do that,” Trump said at the event.

Sanders, who is the daughter of former Arkansas Gov. Mike Huckabee (R), called the White House job “the honor of a lifetime” and “one of the greatest jobs I could ever have.”

“I’m going to continue to be one of the most outspoken and loyal supporters of the president and his agenda and I know he’s going to have an incredible six more years and get a whole lot more done,” she said.

Sanders told reporters afterward that she informed Trump earlier Thursday of her plans to leave the White House, but said they did not discuss her possible replacements. Asked if she will run for governor, Sanders said, “I don’t know. I learned a long time ago never to rule anything out.”