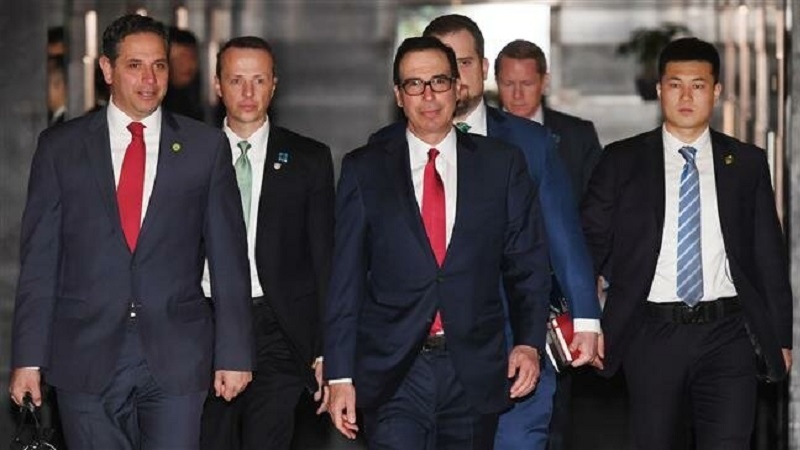 Top US officials will travel to China next week to hold trade negotiations slated to being on April 30, the White House says.

According to Press TV, the White House made the announcement in a statement on Tuesday, saying the officials include Trade Representative Robert Lighthizer and Treasury Secretary Steven Mnuchin.

“The subjects of next week’s discussions will cover trade issues including intellectual property, forced technology transfer, non-tariff barriers, agriculture, services, purchases, and enforcement,” according to the statement.

The White House also said that Chinese Vice Premier Liu He, who will lead the Beijing talks for China, will visit Washington on May 8 to continue the discussions.

Earlier on Tuesday, Larry Kudlow, Director of the White House National Economic Council, said Washington and Beijing were making progress in the negotiations, adding he was “cautiously optimistic” about the prospects for reaching an agreement.

“We’re not there yet, but we’ve made a heck of a lot of progress,” Kudlow told reporters at the National Press Club.

The world’s top two economies had been locked in an unprecedented tariff war with each other for seven months before they resumed talks in February.

US President Donald Trump said at the time that the talks with the Chinese side were “going very well” as both countries acknowledged that they had made major progress during a similar round of talks in Washington in January, but a vast gulf remains on some issues.

Since last year, Washington and Beijing have imposed tariffs on more than $360 billion in two-way trade.

The US is demanding extensive changes to Chinese practices that the White House has branded as unfair, including the alleged theft of US technology and intellectual property. Washington also accuses Beijing of setting up myriad barriers for foreign companies to work in the Chinese market. China rejects the allegations.

Beijing has offered to increase its purchases of US products but is widely expected to resist calls for far-reaching changes to its industrial policies.